Maize (Zeamays) is cereal crop that is grown around the world. Maize is of the domesticated variant of teosinte, of the order of poales and belongs to the poaceae family. It can be used as a source of maize ethanol and biogas fuel. Its use as reinforcement in polymer composites production requires the understanding of their chemical composition, microstructure and thermal behaviour. In this work an attempt was made to investigate maize husk particles through scanning electron microscopy and X-ray diffractometer, the chemical composition was carried out with Crampton and Maynard method and their functional groups through Buck Infrared spectrometry. The composites were obtained by compounding and hydraulically pressing maize husk particles (MHp) with recycled low density polyethylene (RLDPE) into Maize husk/recycled low density polyethylene composite (MHRLDPEC), the thermal behavior of the composite was investigated through thermogravimetric analysis, and the morphology of the composite was also studied. The various results obtained are comparable to those of other common fibres and confirm that maize husk particles show some potential as reinforcement in polymer matrix composites.

Maize (Zeamays) is a member of the grass family (gramineae). It originated from South and Central America. It was introduced to West Africa by the Portuguese in the 10th century. Maize is one of the most important grains in Nigeria, not only on the basis of the number of farmers that engaged in its cultivation, but also in its economic value [1]. Maize is a major important cereal being cultivated in the rainforest and the derived savannah zones of Nigeria. Maize has been in the diet of Nigerians for centuries; it started as a subsistence crop and has gradually become a much more important crop. Maize has now risen to a commercial crop on which many agro-based industries depend on for raw materials [1]. Maize is one of the most important cereal crops in terms of production in Africa, most especially in Nigeria, where about 70% of the total population of the country produces maize [2].It is grown widely throughout the world and generally more consumed by Nigerians than any other grain. It can be eaten after cooking or smoking and can also be converted into animal feeds [3]. In Africa, maize has become a staple food crop that is widely produced and consumed. It is used in various forms to alleviate hunger; such form includes pap, maize flour etc. Because of the importance of maize, it’s processing and preservation must be done to an optimum condition. The major steps involved in the processing of maize are harvesting, drying and dehiscing [4]. The wastes of maize, which are what is left after agricultural production, sometimes left behind on the land (straw) or after eating the maize, form liters in the environment in developing countries. A study has it that these cellulose-rich substrates form a total of more than 1,800 million tons annually of renewable resources and the 95 percent residue needs considerable processing, be it physical, chemical, or via some form of bioconversion [3]. These disposed maize wastes have some negative effects on the environment by causing a nuisance and health risk such as dust, odour, attraction of flies, offensive particulates, liquids or mists, altering soil health by changing the pH of the environment and by adding compounds that can be considered contaminants, leading to increase of nitrate levels in ground water due to rapid mineralization and subsequent leaching [3]. Maize husk is a complex substance that contains cellulose, hemicelluloses, lignin and ash, with each of these affecting the properties of the maize husk fibre [5]. Maize husk is an agricultural by-product present in significant amount but has low commercial value [6]. Maize husk is an example of plant residues, mainly composed of ligno-cellulose materials, having relatively large surface areas that can provide intrinsic adsorptive sites to many substrates due to the columbic interaction. They are renewable agricultural wastes available abundantly at little or no cost [6]. Recently, several attempts have been made to examine the potentials of natural fibres as reinforcements in composites,

Mendes et al [7] worked on Chemical, physical, mechanical, thermal and morphological characterization of corn husk residue, according to the results they obtained, corn husk has low lignin content and similar amounts of hemicellulose and cellulose to those of the other fibers considered. In addition, the corn husk biomass showed better tensile property than piassava and coir and similar maximum safety temperature to that of caroa and olive husks Ademoh et al [8] examined the Development and Evaluation of Maize Husks (Asbestos-Free) Based Brake Pad, Aremu et al [9] studied the suitability of Nigerian corn husk and plaintain stalk for pulp and paper production, Hassan et al [10] examined the potentials of maize stalk ash as reinforcement in polyster composites and Chigondo et al [11] studied maize stalk as reinforcement in natural rubber composites. From their research works, it is evident that natural fibre materials could be used as a potential source of reinforcements in composite. Inspired by those studies, the aim of this work was to investigate the potential of maize husk fibre as reinforcement for polymer composites. In order to achieve this, the maize husk fibre was characterized using Scanning electron microscopy (SEM), Fourier transforms infrared spectrometry (FTIR), X-ray diffraction (XRD) andTGA Q50 thermogravimetric analyzer.

The chemical composition of compounds present in the maize husk particles was determined according to Crampton and Mayrand method at the Spring Board Laboratory, Awka, Anambra State, Nigeria [12].

XRD analysis of the maize husk particles was carried out, to determine the various elements and phase distributions in themaize husk particles. The test was carried out on a Philips X-ray diffractometer. The measurements were performed on a Bruker AXS D8 Discover X-ray diffractometer equipped with a Hi-Star 2D detector using Cu Ka-radiation (k= 0.154 nm) filtered by cross-coupled Gobel mirrors at 40 kV and 40 mA.The X-ray diffractograms was takenusing Cu Kα radiation at scan speed of 3O/min [13].

Sample Preparation of the MHRLDPEC

Microstructural Analysis of the RLDPE, Mhp and Maize Husk Composite

The scanning electron microscope (SEM) JEOLJSM-6480LV was used to identify the surface morphology of the particles and composites. The surfaces of the composite specimen were examined directly by scanning electron microscope JEOLJSM-6480LV. The particles were washed, cleaned thoroughly, air-dried and coated with 100Å thick platinum in JEOL sputterion coater and the SEM was observed at 20kV. Samples were sputter-coated with gold to increase surface conductivity at the University of Witwatersrand, Johannesburg, South Africa. The digitized images were recorded [14].

In other to study the potential thermal properties of maize husk in polymer matrix applications, 50 g of maize husk fibre and 50 g of recycled low density polyethylene were mixed and compounded into a homogenous mixture, using a standard two roll mill. The compounded mixtures were then placed in turn into a metal mould and pressed using a standard hydraulic press, for 13minutes, at a temperature of 150oC and a pressure of 3MPa to form square plates. Thermal decomposition of the composite was observed in terms of global mass loss with the aid of a TA Instrument, TGA Q50 thermogravimetric analyzer (TGA) using a TGA/DSC 1-1100SF instrument (Mettler) at the University of Witwatersrand, Johannesburg, South Africa. This apparatus detected the mass loss

with a resolution of 0.1 as a function of temperature. The particles were evenly and loosely distributed in an open sample pan of 6.4 mm diameter and 3.2 mm deep with an initial sample amount of 8 mg. Due to different bulk densities, the depth of the sample layer filled in the pan was about 1-2 mm. The temperature change was controlled from room temperature (25±3°C) to 700°C at a heating rate of 20°C/min. The sampling segment was set at 0.5 second per point [15].

Fourier transform infrared spectrometry (FTIR) was carried out on the maize husk particles with the Buck scientific infrared spectrophotometer, model number M530, at the Spring Board Laboratory, Awka, Anambra State, Nigeria, and scanned at a range of 350-400 nanometers.

The chemical composition of maize husk is extremely complex due to the different compounds present at various concentrations. The results show that maize husk contain cellulose 40%, hemicelluloses 45%, lignin7%, ash 3% and others 5% by weight, this reveals that the composition of maize husk particles contain hemicellulose, cellulose and lignin that has been confirmed by literature [16]. The results compared favorably and are in line with the chemical composition of some natural fibres, which have been used as reinforcement in natural composite materials [17, 18]. The XRD pattern of the maize husk particles (Figure 1-2) and (Table 1) reveal that the major diffraction major peaks are 44.37°, 11.44°,62.87° and 41.68°, their inter-planar distance are 2.04Å, 7.74 Å, 1.48 Å and 2.17 Å, their relative intensity of X-ray scattering are 39.65, 33.78, 30.82 and 31.25, and phases at these peaks are Carbon (C), 4, 4’-Dihexanoyloxydiphenyldiacetylene (C28H3004), Stishovitesyn (SiO2), Tridymite 2\ITH\RG (SiO2), Cliftonite(C) respectively. 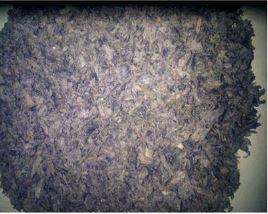 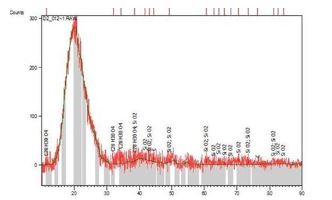 The result showed that carbon has the highest percentage of the entire compound and elements present as revealed by the XRD analysis. This is similar to other related results [19, 20]. From the microstructure of the maize husk particles (Figure 3), it is evident that the particles consist mainly of spherical and random distribution, while some angular particles could be found. The result also show that carbon have a fine structure. This also shows carbon which has significant surface area in the range of hundreds of square meters per gram and microspores with pore size maxima around 7.74 Å [21].

Figure 3: Plots of identified phases in the XRD pattern of the maize husk particles.

(Figure 5), shows the FTIR spectra which serve as a characteristic medium for identification of compounds and their functional groups (Table 2).

The presences of endothermic effects in the sample are results of three processes: intermolecular dehydrogenation, vaporization and solid state decomposition of some additives. The total burning and degradation of the residual polymer backbone (dehydrogenation RLDPE) took place at temperatures interval of 200-500oC. This result is in par with [23], and is in good agreement with the theoretical stoichiometric values, based on the fact that lignocellulose materials are chemically active and decompose thermochemically between 150 and 500°C; hemicellulose mainly between 150 and 350°C, cellulose between 275 and 350°C and lignin between 250 and 500°C [24].The microstructure of the 50%MHp/50%RLDPE composite sample (Figure 8) reveals that there is a reasonably uniform distribution of maize husk particles in the RLDPE matrix.

Figure 9: SEM/EDS of the microstructure of the 50%MHp/50%RLDPE composite sample.

The maize husk particles are embedded within the amorphous matrix and randomly distributed in the matrix planar boundaries. The surface of the composite is smooth, indicating that the compatibility between particles and the RLDPE is fairly good. It can be observed that the maize husk particles are not detached from the RLDPE, indicating fair interfacial bonding between the filler and the matrix. From the composite surface morphology, external surface features of the composite, such as contours, defects, damage and surface layer were not observed in the SEM (Figure 9).

The particles surface layer is relative of minor portion of particles. Also the SEM image of the composite clearly indicated fairly good particle matrix adhesion, suggesting good bonding between the maize husk particles and the RLDPE polymer matrix. The inspection of the EDS spectra of the composite, as seen in Figure 8, indicates that it contains mainly carbon and oxygen. The higher carbon portion in the composite can be attributed to the carbon rich particles of the maize husk.

The following conclusions can be drawn from the analysis of the results given above: