Dandelion – An Alternate to Natural Rubber

Dandelion also known as TKS (Taraxacum kok-saghyz), grown in Kazakhstan, Uzbekistan and northwest China and considered as a potential source of the alternate of Natural Rubber (NR). This review briefly described the plantation conditions, chemistry, extraction, various application and future scope of this natural polymer. NR is considered very important industrial material, especially for Aerospace and Auto-mobile industry applications. Any alternate to this engineering material is of great significance.

Rubber is one of industrial civilization’s great unsung heroes. Apart from its obvious uses in tires, condoms and underwear elastic, it is a crucial ingredient in some 40,000 products, including shock absorbers, transmission belts, gaskets, hoses, medical devices, sports equipment, cement, paints, plastics and pharmaceuticals. The world needs rubber. Rubber is crucial for the tires of cars, trucks and airplanes that drive modern transportation. It is also used as latex gloves in lab, balloons in angioplasty and wetsuits that warm a cold dip in the ocean .In 2017, global demand for rubber was about 30million tones. The NR industry could satisfy 45% of that needs and this proportion will only decline. The Japanese blockade also hit the US. In 1942, it set up the Emergency Rubber Project, employing more than 1000 scientists to find alternatives. They too experimented with Siberian dandelions, and also a desert shrub, Parthenium argentatum, better known as guayule. This had already been commercialized as a rubber crop in the early 20th century, although that industry died out in the Great Depression. The project cultivated wild guayule plants from Mexico and Texas, but the war ended before it could make much headway. Siberian dandelions, and also a desert shrub, Natural rubber (NR) is a strategic raw material at a global level, used in at least 50,000 applications, from the production of medical devices and personal protection to vehicle and aircraft tires [1]. Traditionally, NR is extracted as latex from the rubber plant or gum tree which is mainly grown in tropical areas of Asian-Pacific countries, where 90% of the NR global production is concentrated. However, potential shortages in NR supply are caused by pathogenic fungi attacks, land use change in production areas, vulnerability to climate change, and the onset of

allergies due the presence of some proteins in latex [2,3]. Dandelion is the flowering weed, which is the key element for the future of tires. In the next few years, global demand for NR is set to rise and at the same time, the changing world makes it challenging to meet this demand. To meet this challenging demand Dandelion can be used as an alternative source for NR production. Roots of this weed species contains the NR latex, which means supply will be supported to control leading to greater price stability. This crop is much less sensitive to weather as compared to rubber tree.

There is great interest in developing additional plant models for NR production. Many plant species produce constituents of NR in their sap, but very few species produces high-molecular weight rubbers, which is suitable for the production. Guayule and Dandelions are the plants which can be substitute for conventional rubber trees. Russian dandelions like other dandelions, TKS plants grow rapidly, also could be cultivated in any type of environment and probably easy to harvest. Research on TKS has already yielded important discoveries, such as the cloning and characterization of rubber biosynthesis genes [4]. TKS, belonging to the Asteraceae family, is a species of Dandelion. It is mainly found in Kazakhstan, Uzbekistan and north-west China, considered as promising alternative solution for the substitute of Natural Rubber latex [5].  Due to the high content of rubber in its roots, it was considered in the Soviet Union as a strategic resource until the early 1950’s. During the Second World War, other nations such as the United States, Germany, England, and Finland have directed their strategic programs for the obtainment of natural rubber supply from the aforementioned species. TKS has a particular root system capable of producing and storing rubber fragments of a quality similar to that found in the gum tree bark. A substantial difference between the two species is that whereas Hevea Brasiliensis gum is obtained practicing incisions on the bark and has a milky consistency, in TKS it is contained in the young roots in both solid and milky form.  From the molecular and qualitative point of view, TKS gum is perfectly comparable to that of Hevea Brasiliensis even if the concentration is influenced by cultivation techniques and plant age, and, in general, by the edaphic conditions of the growth environment[6].  In Guayule, the cells of living plant tissues contain the latex rubber whereas, in the Russian dandelion, it is produced in the lactifier storage vessels within the roots. Thus, the level of plant maceration and cell disruption required to extract TKS rubber is less than it is for guayule. Additionally, TKS dandelion does not have a sticky, low-value resin fraction to process, as does the guayule plant. The ideal rubber-producing crop plant would be annual, fast-growing, and produce large amounts of biomass. Annual crops can be readily planted and plowed-out in response to market needs and farmer production considerations, and are also more readily included in on-farm crop rotations and farming systems. Russian dandelion might fit these requirements better than guayule. Converting Russian dandelion to a commercially attractive crop would require an increase of vigor and agronomic properties, for example by hybridization of the Russian dandelion with the common dandelion [8]. Several features make Russian dandelion a very attractive model species to study rubber biosynthesis. Russian dandelion has a short life-cycle (6–8 months) relative to other plants, such as Hevea Brasiliensis, where several years of growth are needed before clear phenotypes can be determined. Similarly, guayule can only be assessed after at least two years. Furthermore, Russian

dandelion is both amenable to tissue culture and can be relatively easily transformed, with the analysis of meaningful rubber phenotypes possible within six months after transformation. The growth cycle for the Russian Dandelion is estimated approximately one year. Conversely, rubber tree, where the first harvest starts seven years after planting.

The chief constituents of Dandelion root are Taraxacin, a crystalline, bitter substance, of which the yield varies in roots collected at different seasons, and Taraxacerin, an acrid resin, with Inulin, gluten, gum and potash. The root contains no starch, but early in the year contains much uncrystallizable sugar and laevulin, which differs from Inulin in being soluble in cold water. In the fresh root, the Inulin is present in the cell-sap, but in the dry root it occurs as an amorphodus, transparent solid, which is only slightly soluble in cold water, but soluble in hot water. Antioxidant activity throughout the plant is very diverse. The strongest antioxidants include polyphenols: flavonoids, is flavones, anthocyanins, and catechin and also for carotenoids, ascorbic acid, and tocopherols [7].  Due to phenotypic plasticity or genotypic variability, dandelion has the ability to adapt and grow in a wide range of environments [8]. Chemical analyses indicated that concentrations differed among biotypes for certain elements. This factor may be a concern in sampling dandelion plants to monitor metal contamination from industrial sources. Concentrations of all elements measured in all biotypes were close to background levels reported in the literature. At these concentrations, all biotypes have acceptable mineral and protein content for cattle feed and may partially reduce the requirement for mineral supplements for cattle fed tame forages [9].

The difficulties in existing rubber plantation and with the growing demand of NR, there is crucial need for alternate solution. Here, the extraction process of rubber and other products from dandelion is integrated (fig 1).

Due to this overall crop economics are favorable. This process produces rubber, which maximizes the value of this crop – Dandelion. Apart from producing rubber, many other herbal remedies and functional foods are obtained from this crop. In this review, the processing of Dandelion includes the maximum value- addition of all the parts i.e., from leaves to its roots. Fig. 1 indicates how rubber can be produced economically and how co- products are extracted. In Dandelion roots the major elements are insoluble fiber, soluble sugars and Rubber. Fig. 1 depicts overall process after the harvesting of Dandelion, roots and leafs are separated. Here leaf can be bifurcated into two different production processes and roots into three different production processes. The latex rubber is derived from the roots of the dandelion at required temperature and pH. Addition of chemicals and removing of unwanted fibers is done, after which the latex rubber is obtained [10]. 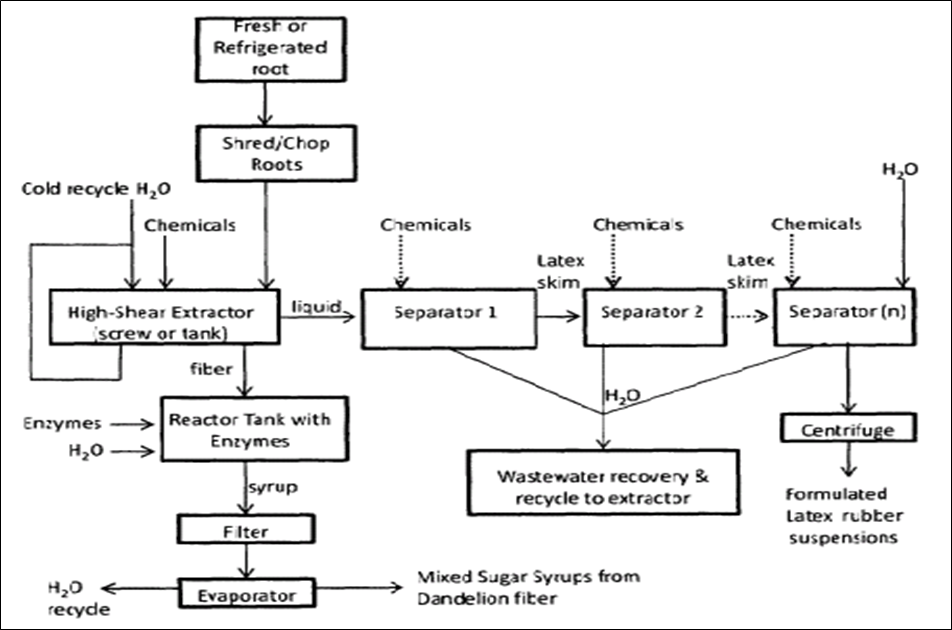 Dandelions are modest plants that are an excellent alternative for raw material of high demand. Natural rubber, the fundamental ingredient for rubber products is a very important engineering polymer. Natural rubber obtained from dandelions could reduce the dependence on imports from Asia. This could give economic and carbon emission benefits, which could be a significant benefit for the Rubber industry. Dandelion can be grown in the northern regions, which in the main benefit. It yields a high-quality rubber. To grow immense stretches of Dandelion on the plains of Kazakhstan, where this species is already endemic, seems more natural, at least more nature-friendly. Also, its harvest can be automated. Dandelion is potentially sustainable. It can quickly meet spikes in demand for Natural rubber. Dandelion has a high genetic diversity. It can also be easily cultivated on the land not suitable for food production. Laboratory tests on the physical and chemical properties of Dandelion rubber showed that it was of excellent quality. Tires made from Russian Dandelion rubber were as resilient as those made from Hevea Brasiliensis and better than guayule-based tires.

Dandelion is one of the most promising options for the natural resource of latex – rubber. One Dandelion project is currently conducted by the Fraunhofer Institute for Molecular Biology and Applied Ecology (IME) in Aachen (Germany), in collaboration with tire manufacturer Continental AG. Fraunhofer is one of the largest European application-oriented research institutes. The tire from rubber – latex of Russian dandelion was manufactured on lab scale and its further testing is under progress. According to the researchers, dandelion has been genetically modified. The next step will involve cultivating optimized plants using conventional breeding techniques.

Dandelion is being developed for the Automobile industry as a potential replacement of Natural Rubber. Continental tires have already started its cultivation and using it for different critical tire components. Recently published research article also indicated the phenolic content and antioxidant activity in the leaf of Dandelion, as a bio-product for the production of Natural Rubber. As per the current trend usage of Dandelion may gain momentum in years to come.

Of the sources identified, the extraction of latex from dandelion plants was identified as the overall best choice as the new and alternative source of Natural Rubber, depending upon its cultivation economics. Recently invented usage of its leaves for phenol and their antioxidant capacity will further boost up Dandelion Industrial usage. Dandelion crop as a whole is of great importance for Latex-rubber, as well its co-products can be used as herbal remedies, carbohydrates, etc. A dandelion crop that can be cultivated easily makes it more useful.