Gastric outlet obstruction is overwhelmingly described as web/stenosis/annular pancreas/ malrotation in neonates and infantile hypertrophic pyloric stenosis in infants, and these causes frequently overshadow the other rare causes. We present a case of a neonate presented initially with respiratory distress (RD), diagnosed as Transient tachypnea of newborn (TTN), managed with continuous positive airway pressure (CPAP) and subsequently showed features of gastric outlet obstruction. The baby was operated and underwent pyloroplasty due to the failure of conservative treatment and probably is the youngest patient of Jodhpur disease to the best of our knowledge.

Continuous positive airway pressure (CPAP) administered as a mixture of oxygen and compressed air via nasal prongs has dramatically improved survival rates and lessened the frequency of barotrauma and bronchopulmonary dysplasia in the premature infant with respiratory distress syndrome. Associated with the increased use of nasal CPAP, has been the development of marked bowel distension, CPAP belly syndrome, the diagnosis of which is made if there is an associated history of use of CPAP and other causes of gastric outlet obstruction have been excluded [1,2]. On the other hand Jodhpur disease which is also known as Primary acquired GOO of infants and children, is also a rare cause of GOO. To the best of our knowledge it has never been reported in the neonatal period so far.

A 5-day-old, premature, male baby with birth weight of 1.8 kgs, presented with respiratory distress since birth, which was managed by bubble CPAP. As the distress subsided, the child had feed intolerance from day 3 of life, associated with non-bilious vomiting. X - Ray abdomen showed a large gastric shadow (Figure 1). The distension of the stomach did not decrease significantly on naso-gastric (NG) drainage. Ultrasound of the abdomen ruled out malrotation and pyloric stenosis. Due to persistence of epigastric distension, and the high NG aspirate, the decision to perform an exploratory laparotomy was taken. The stomach was hugely distended with normal pylorus. Malrotation was absent. Pylorus was opened and there was absence of mucosal web/diaphragm. Mucosal biopsy was taken and was closed in Heincke- Miculikz fashion (Figure 2). Histopathological examination revealed mucosal and submucosal congestion. Post-operative recovery was uneventful, nasogastric tube was removed on post-operative day 3, and feeds started soon after. The child was asymptomatic with good weight gain at 1 year follow up. 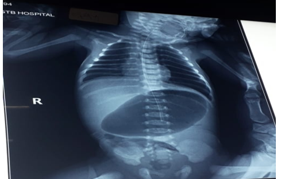 Early use of CPAP is associated with decreased incidence of chronic lung disease in premature children; thus CPAP is being used as an alternative to intubation and mechanical ventilation in some units, and also as a means to wean off from ventilator support. Bubble CPAP (BCPAP) is considered superior to CPAP, but its pressure delivery system can be unpredictable, and has been associated with gaseous bowel distension in infants [3]. The bowel distension is not there at birth, but as the infant swallows up air due to continuous flow of air to the nasopharynx, distension becomes marked. However, all cases of CPAP belly syndrome resolved on gastric decompression using a NG tube. There is no reported case of this entity managed by surgery. In our case non-resolution of the gastric distension led us to make alternative diagnosis and do an exploratory laparotomy. Another possibility in our case was Jodhpur disease, also known as Primary acquired GOO during infancy and childhood [4]. Jodhpur disease is also a diagnosis of exclusion. Twenty-two cases of Jodhpur disease have been reported in the literature, 14 of them being from India, and 13 of them having been reported from Jodhpur, thus the term Jodhpur disease.4 The incidence is low, 1/100000 live births, with predilection for male sex and mean age of presentation being 2.9 years (average 1 month- 6 years)[5].

We conclude that diagnosis of GOO in neonate can be sometimes tricky and when usual causes are ruled out and conservative management does not succeed, exploratory laparotomy is a logical course of action. We report the first case of Jodhpur disease in the neonatal period.