Epidural Tuberculous Abscess of the Posterior Cerebellar Fossa Extending To the Cervical Spine: An Unusual Form of Central Nervous System Tuberculosis in Children

We report the case of a twelve-year-old girl with a central nervous system (CNS) epidural tuberculous abscess (TBA) sitting in the posterior cerebellar fossa (PCF) with a cervical spine extension. CNS TBA is a rare form of CNS tuberculosis (TB) even in countries where TB is endemic. Diagnosis is mostly guided by magnetic resonance imaging, although formal evidence of a TBA is histological. Few medically treated cases of TBA of the PCF have been reported. Our patient did not respond to antitubercular treatment alone even after one year of treatment, which is consistent with the available data in the literature favoring surgery in PCF TBA.

Learning Points: Surgery is the first-line treatment for tuberculous abscesses of the cerebellar fossa. MRI is the imaging modality of choice in cases of suspected CNS tuberculosis infection. The emergence of resistance to antitubercular drugs should lead to greater caution before their use in case of suspicion of CNS TB.

We report the case of a 12-year-old girl with a family history of pulmonary tuberculosis in her younger sister, who was treated without complications a few months before the onset of her symptoms. The patient developed anorexia, weight loss, and night sweats without cough or dyspnea that progressed for three months. The clinical picture was complicated by the appearance of vomiting, headache, and cough with no other neurological or respiratory signs that prompted an initial consultation during which the patient was placed on symptomatic treatment without further investigation. The patient then presented with worsening headache, vomiting, the development of a motor deficit of the lower limbs, and shortness of breath, which prompted an emergency department visit. The initial examination found a patient with a fever at 38.4°C, dyspneic, hemodynamically stable, conscious, with symmetrical and reactive pupils, without photophobia, oculomotor paralysis, or clinical abnormality relating to the other cranial nerves. However, the patient had spastic paraparesis and meningeal stiffness.

Figure 1: Post-contrast T1 weighted sagittal (A) and axial (B) MRI showing an enhancing basal collection extending into the cervical spine.

In the posterior cerebellar fossa level, the MRI showed an extensive peripherally enhancing posterior collection with increased diffusion and high ADC value extending from the base of the cerebellum to C7. It exerted a mass effect on the anterior bulb and the cervical medulla at C7 with a discretely hyperintense medulla on T2 and diffuse epidural enhancement. There were no abnormal disco-vertebral findings. A thoracic CT-scan with contrast was performed (Figure 2), revealing diffuse, bilateral centro- lobular micronodules, and multiple bilateral mediastinal and hilar adenopathies suggestive of miliary tuberculosis.

Lumbar puncture revealed lymphocytic meningitis with hypoglycorrhachia, and a positive PCR for tuberculosis confirmed the diagnosis of CNS TB. HIV ELISA and Western blot serologies were negative. The attending neurosurgery team indicated a laminectomy with the evacuation of the epidural collection; however, the patient's family refused the procedure out of fear of the explained operative risks.

Figure 3: Tetraventricular hydrocephalus with transependymal oedema on axial fluid- attenuated inversion recovery (FLAIR) (A), and its regression after CSF diversion (B).

The patient benefited nonetheless from an emergency cerebrospinal fluid (CSF) diversion resulting in a regression of the hydrocephalus on the control MRI (Figure 3 A-B). She was then put under antibiotic treatment associated with corticosteroid therapy and motor rehabilitation sessions. She did not experience any adverse effects following the start of the treatment. The evolution was marked by a disappearance of the headaches and vomiting and a partial recovery of both lower limbs' motor function without a return to walking at the last consultation. No chest CT was performed to assess the evolution of pulmonary lesions; however, the patient did not present any respiratory symptoms under treatment. Two control MRIs were performed, respectively, one and twelve months after the beginning of the antibiotics. It showed no regression of the epidural collection or the other parenchymal lesions (Figure 4). 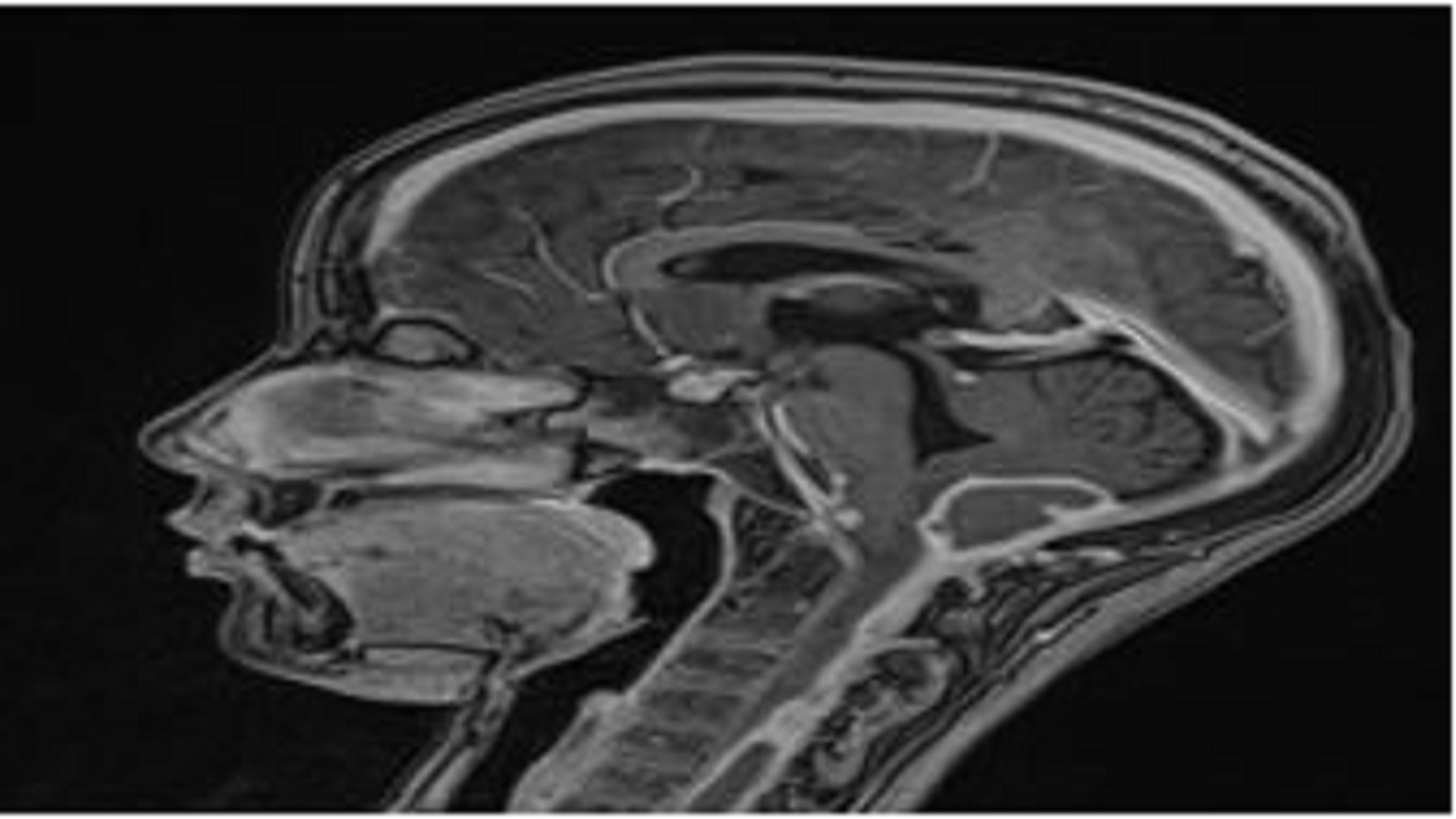 At the time of writing, the patient is still under antibiotic treatment and benefits from rehabilitation sessions.

Although rare, Central Nervous System (CNS) tuberculosis (TB) is the most severe manifestation of TB; it accounts for up to 10% of extrapulmonary forms of TB and 1% of all TB cases [1]. Immunocompromised patients and children are more vulnerable to TB and develop CNS TB more frequently [2]. CNS tuberculous abscess (TBA) is an extremely rare condition even in countries where TB is endemic, such as Morocco, and is associated with poor prognosis [3]. Its diagnosis relies mainly on MRI and biological findings. Whitener, in his 1972 review, developed three criteria to diagnose brain TBA: macroscopic evidence of a brain abscess formation, signs of vascular granulation, and positive acid strainon culture [4]. Those criteria are mainly biological and histological. Medical imaging progress now permits discrimination between a pyogenic brain abscess (the main differential of a CNS TBA on imaging), and a tuberculous one on MR in vivo spectroscopy with relatively good specificity [5]. We did not perform MR spectroscopy better to assess the nature of our patient's epidural collection; however, its high ADC value, the presence of adjacent tuberculomas, the positive TB polymerase chain reaction (PCR), and the endemicity of TB in Morocco were all in favor of the tuberculous origin of the abscess even though Whitener criteria were not satisfied. The treatment of CNS TBA relies on surgery or chemotherapy alone depending on the number of collections, their size, location, and the patient's clinical features. Multiple abscesses are preferably treated by antimicrobial therapy, but patients with solitary well-circumscribed lesions should benefit from surgical excision [6]. Patients with posterior cerebellar abscesses such as the one we are reporting should, however, always be considered for surgery first [7] as the risk of obstructive tetraventricular hydrocephalus is high [8]. In our case, the refusal of surgery left no choice but to use antibiotics alone after the initial CSF diversion. Cases of cerebellar abscesses managed medically have been reported [9], but few were due to tuberculosis, thus not accounting for the often delayed therapeutic response to antituberculosis drugs. Rare cases of complete regression of cerebellar TBA under

antitubercular alone have also been reported [10], suggesting antibiotic susceptibility variability by TB strains. There was no significant regression of our patient's main CNS TB lesion on MRI even after twelve months of antituberculous treatment. As drug resistance tuberculosis is increasing in Morocco and other developing countries [11], keeping a wide therapeutic armamentarium is necessary to ensure the best possible outcome for our patients.

The case we are reporting highlights an atypical form of CNS tuberculosis: the epidural abscess which was responsible for a serious functional consequence as our patient presented with paraplegia. Furthermore, she presented an uncommon form of spinal epidural abscess without bone participation, reminiscent of the polymorphism and multiplicity of clinical that tuberculosis can be responsible for.

No funding was provided nor needed for the writing of this case report.