Now Shifa NICU is the largest unit in Gaza Strip. It had a high neonatal mortality of 20 per thousands in 2012. There is a lack of study about the trend of neonatal mortality in the last six years. We implemented a retrospective cross-sectional study by collection variable data from 2011-2016 to assess the trend of mortality rates among admitted babies in the Neonatal Intensive Care Unit in Shifa Hospital.

Conclusion: Significant drop in mortality is reflecting the teamwork by evidence-based medicine.

The neonatal period is the most critical time as these babies have low immunity and high liability for fatal infection since birth by different organism bacterial, fungal and viral. Neonatal infections also have high morbidity. Preterm babies need more special care and vulnerable to different complications like intraventricular hemorrhage, chronic lung disease, and necrotizing enterocolitis, for these reasons the mortality is higher in preterm babies. Congenital anomalies increased the neonatal mortality [1]. Especially in a low socioeconomic region as appropriate antenatal care, imaging, investigations and genetic counseling are not available. Good neonatal care requires enough beds, highly qualified medical staff and unlimited resources. It is well known the highest mortality in pediatric age in those under five years of age, the majority of these die in neonatal period [2]. Gaza Strip is under siege for more than 11 years.

The Shifa NICU is the largest neonatal unit in Gaza Strip; it has 16 intensive care incubators, 6 high dependency cots and 8 special care costs. The unit is well equipped and provides level 3 tertiary neonatal care mainly to the newborns from the Shifa Women`s Hospital. The Shifa NICU also provides care to newborns from other regions in the Gaza Strip which has a total population of 1.9 million. There are 17 thousand to 19 thousand babies are born yearly in Shifa women`s Hospital. The monthly admission rate in the unit is about 200 cases, of which 40-45% are premature babies. Gaza strip is under siege and is facing economic and political challenges which are negatively impacting the health care services.

The retrospective study will be used in this study. This part of the study will provide a discussion of all aspects of the methodology. It explains the design, method, the study population, the sample, setting, the methods of collection, analysis and instruments that used for data collection in addition to limitations of this project and ethical issues.

NICU admissions: Monthly the total number of a newborn who was admitted to Shifa NICU

LBW: Monthly the number of newborn babies less than 2500 grams who were admitted to Shifa NICU

VLBW: Monthly the number of newborn babies less than 1500 grams who were admitted to Shifa NICU

Asphyxia: Monthly the number of a newborn with hypoxic-ischemic encephalopathy (HIE) who was admitted to Shifa NICU

Asphyxia death: Monthly the deaths of a newborn with hypoxic-ischemic encephalopathy (HIE)

Sepsis: Monthly the number of the newborn who has a positive blood culture

Sepsis death: Monthly the deaths of the newborn who have a positive blood culture

Specific mortality: (Death number of the group; preterm, VLBW. etc) x100 / (Monthly the total number of a newborn who was admitted to Shifa NICU)

A retrospective study was implemented including collection variable data over the last six years to assess the changes in the trend of mortality rates among admitted babies in the Neonatal Intensive Care Unit in Shifa Hospital.

This study will be done in the Neonatal Intensive Care Unit of Shifa Hospital by collecting data from recorded file and data over the last 6 years (2011-2016).

The ambiguous data in records were excluded in this study.

SPSS version 20th is the program that was used for analyzing data. It included data entering, data cleaning, data frequency, and tabulation.

The study approved by administrations of Shifa Hospital and Palestinian Ministry of Health.

The numbers of NICU newborn admission per month showed significantly elevated trend for the last three years (P<0.001) that related to the new policy of newborn admission to Shifa NICU as all babies less than 2 kg, preterm babies less than 34 weeks gestational age, large for gestational age with unstable blood sugar and all babies with respiratory distress more than 2 hours, they should be admitted for further evaluation and investigation. This policy helped too much to avoid hazardous hypoglycemia, hypoxia, detection signs of early sepsis and early management [3].

First of all ;availability of highly qualified neonatologist [5] who skilled in neonatal echocardiography which helped; early detection of congenital heart diseases and persistent pulmonary hypertension [6], other factors concerning neonatal life resuscitation training of all medical staff of Women`s Hospital and NICU [7] and updated protocols of management, also the availability of double wall incubators [8] bubble CPAP machine [9] and high frequency mechanical ventilation altogether helped contribute to gentle ventilation of the preterm babies with less complications and less hospital stay [10,11]. High-frequency ventilation with magnesium sulfate intravenous infusion as a protocol for PPHN was so effective [12]. There is a significant drop of congenital anomalies deaths in the last four years ((P<0.001) compared to 2011 and 2012 that was related to early detection, intervention, multidisciplinary team plan and management especially for congenital heart diseases [13]. Asphyxia deaths were significantly decreased in 2016 and 2013 compared to 2011((P<0.002)that was related to neonatal life support training for whole medical staff, body cooling machine and cooling treatment protocol [14]. The updated antibiotic protocol according to the last study in Shifa NICU [15], antifungal prophylaxis [16] and standardized hand hygiene contributed to control the NICU neonatal infection [17] , as sepsis deaths were significantly decreased between 2014 compared to 2012 (P<0.001).

There was significant neonatal mortality drop after 2012 compared to that before 2012; that related to the renovation of the units, equipping and medical staff training

Attendant consultant neonatologist should be available at all work shift. Nurse care in NICU should be not less one nurse to one baby in level 3 and not less one nurse care to two babies in level 2. Bed occupancy should not exceed 80%. Yearly research of the most common organisms of neonatal infection, antibiotic susceptibility to find out the appropriate initial antibiotic treatment. 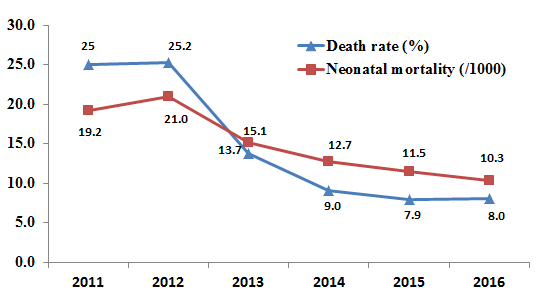