Primary cranial vault lymphoma constitutes only 0.2% of lymphoma cases. The diagnosis of primary malignant lymphoma must be considered in the differential diagnosis in any patient with a scalp masse extending through the skull because the prognosis of non-Hodgkin lymphoma of the cranial vault is uncertain. We report a case of scalp and cranial vault primary non Hodgking lymphoma in young women because of its rare occurrence.

Primary cerebral non Hodgking lymphomas is a rare of neoplasm and are mostly intra axial with frequent invasion of leptomeninges. Primary malignant lymphoma arising from cranial vault or scalp without invasion of the cerebral parenchyma and systemic or skeletal manifestation is also rare. A few cases have been reported in the literature. Invasion of the bone including frequently the scalp is more frequent with secondary non-Hodgkin lymphoma.

A 25 year-old women was admitted to our department with a history of painless scalp swelling over the left parietal region which grows progressively for over one-year duration. She had also headache and progressive loss of vision for eight months. There was no medical history of fever or head trauma. Patient’s physical examination revealed no focal neurological abnormality other than a left parietal area mass involving the scalp. Her general examination revealed no other abnormality. Physical examination revealed a firm, no pulsatile, ill-defined and immovable subcutaneous mass measuring 4 cm × 3 cm in the left parietal area. There was no sign of inflammation over the lesion. Her blood investigations were negative and serological test for HIV, HBS infection was negative.

Brain imaging showed a well-defined lesion in the left parietal area with intra and extra cranial extension. It had an attachment to dura, which showed thickening around the base of the lesion. CT scan with bone windows revealed involvement of both cranial tables with osteolysis. There was perilesional edema displacing cortex. The lesion was homogenously enhanced with contrast on magnetic resonance imaging. The radiologic differential diagnosis included malignant meningioma, primary bone tumor and bone metastasis. Bone aspiration and biopsy from the posterior iliac spine revealed no involvement. Cerebrospinal fluid cytology was negative for lymphoma for lymphoma cells. Contrast computed tomography of chest, abdomen and pelvis showed no evidence of lymphoma lesion. 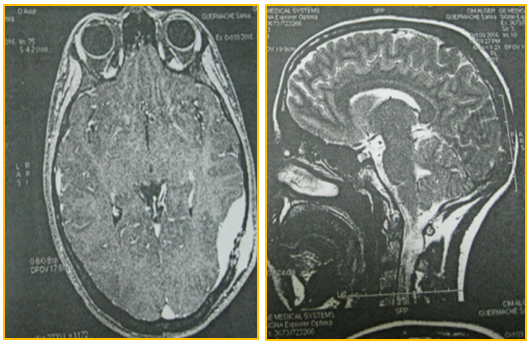 Figure 1: Brain imaging (MRI) showed a well-defined lesion in the left parietal area with intra and extra cranial extension. It had an attachment to dura which showed thickening around the base of the lesion and involvement of both cranial tables with osteolysis.

She underwent left parietal craniotomy with total excision of the tumor including the involved bone and dura. The tumor was hyper vascular, fleshy in consistency and infiltrating the scalp, bone and dura. Underlying cerebral parenchyma was unaffected. Histopathology revealed a diffuse, large B cell type of lymphoma and Immunohistochemistry ‘IHC’ analysis was positive for CD20 and CD 45. EMA was negative and diagnosis of meningioma was excluded. These results are in favor of high-grade diffuse large B cell lymphoma. She received postoperative chemotherapy followed by radiotherapy 40 Gy in 22 fractions.

The patient after 18 months of follow-up is doing fine without signs of systemic dissemination.

Figure 2: The mass lesion with infiltrated skull and dura was excised en-bloc.

Non-Hodgkin’s lymphoma “NHL” represents 3-4% of all neoplasm in the general population and occurs more frequently in patients with immunodeficiency syndrome. Primary bone lymphoma is characterized as a lymphoma of the bone without any simultaneous systemic manifestation. It’s occurs in 3-4% of the cases [1]. Involvement of the cranial vault is an unusual manifestation of non-Hodgkin’s lymphoma in patients without HIV infection. Only fourteen patients with HIV negative have been reported in the literature ‘’Successful management of primary non-Hodgkin’s lymphoma of the cranial vault. Most series show a male preponderance with a median age of presentation in the fifth or sixth decade [2,3]. Our patient was female and presented young age in comparison to the literature. The clinical presentation includes a painless scalp swelling, headache and focal neurological deficits. In our case painless scalp swelling was not associated with any neurological deficits. MRI of lymphoma cannot be specific because its appearance can mimic others lesions as malignant meningioma, primary bone tumor and bone metastasis. Bone destruction may not be seen. In the present case, the skull was completely destroyed and tumor infiltrated the dura. Most lymphoma of the cranial vault is B-cell non Hodgkin lymphoma as in our case. However, to confirm diagnosis histopathology with IHC analysis are necessary. The optimum treatment includes surgery followed by chemotherapy and local radiotherapy with good outcomes in most cases [3-5]. Present case was managed by large excision of tumor and involved bone and dura followed by chemo-radiotherapy with good outcome. The prognosis of non-Hodgkin lymphoma of the cranial vault is uncertain. So, any involvement of cerebral structures indicates a less favorable prognosis [6-8].

Although it is extremely rare, the diagnosis of primary malignant lymphoma must be considered in the differential diagnosis in any patient with a scalp masse extending through the skull.