Conclusions: LAA is a safe and effective abdominoplasty technique, which suggests longer flap excursion and improved flap perfusion with lower incidence of complication.

This prospective study was undertaken in General Surgery Department, Zagazig University Hospitals, Faculty of Medicine, in the period from December 2016 to December 2018. We included 20 patients which needed lipoabdominoplasty that were divided into 2 groups; group 1 includes 10 patients where LAA were performed and group 2 includes 10 patients where abdominoplasty alone without prior liposuction were done. Surgery was performed under general anesthesia. The usual length of the operation was 4-4.5 hours. Patients were discharged home after about 2-3 hours in the recovery room. All patients were allowed to walk, showered, and returned to normal activity the morning after surgery. Strong abdominal exercises were avoided for 3 months after operation.

In the first group; LAA cases, the liposuction was performed first, followed by the abdominoplasty while in the second group abdominoplasty is done alone without prior liposuction. First, anesthetic fluid of the surgeon’s choosing is infiltrated between the deep fascia and the subcutaneous tissue with 3 mm infiltration cannulas attached to 60 cc Toomey syringes, to “separate” all the subcutaneous tissue from muscles of abdominal wall which is called hydro-dissection. Point of entry is from the right or the left sides, above the umbilicus. Initially infiltration and separation is done in the epigastrium then in the area below the umbilicus. The plane of dissection remains is deep to Scarpa’s fascia. The cannula slips under Scarpa’s fascia. Then, liposuction followed infiltration, removing the deep fat layer which is bordering the muscle and disrupting the skin which is retaining ligaments but preserving the blood vessels which is called “lipo-dissection”. Detachment of the subcutaneous tissue from the muscle by liposuction and removing the fat which is bordering the muscle creates a “safe zone,” which is a space that prevents perforations. The superficial surface of Scarpa’s fascia is separated from the infra-umbilical skin by liposuctioning the subcutaneous fat, which exposes Scarpa’s fascia and preserves branches of femoral artery which are coursing on the superficial surface of the fascia. Liposuction of the flap’s undersurface is used to detach and thin the flap. Then, a curvilinear incision is made to split Scarpa’s fascia in the midline to preserve its lymphatic and vessels and the abdominal flap is elevated from the deep fascia sharply and bluntly. Traction on the flap is applied to prevent flap downward movement. Panniculus excision is done and the flap is placed under tension during excision of the panniculus. Panniculus excision is done by superficial liposuction. Bleeding from the edge is expected. Subcutaneous suction drains are used. Tacking sutures are avoided for fear of flap’s vascular supporting tissue layer damage (Table 1).

The overall complication rates of liposuction assisted abdominoplasty were 10% for patients in group 1 and 40% in patients in group 2 (p=0.049) (Table 2). There were no deaths. One patient from group 2 developed late complication; a deep venous thrombosis after lipoabdominoplasty and was hospitalized for anticoagulation (p=0.038). The incidence of wound infection, seroma and skin flaps ischemia is less in group 1 than group 2 (p=0.026, 0.046 and 0.039 respectively). The majority of patients reported experiencing a marked improvement in their appearance and function and patients in group 1 were more pleased with aesthetic results Patients’ satisfaction, cosmetic results, Body Contouring was higher in group 1 than group 2 (p=0.006, 0.009 and 0.029 respectively). No significant correlations were detected between the overall incidence of complications and patient age, smoking history, or body mass index. Men had fewer complications than women overall, but this finding was related to the fact that fewer men underwent an abdominoplasty (Figure 2,3).

The incidence of wound infection, seroma and skin flaps ischemia is less in LAA than group 2 in which abdominoplasty alone was done. The majority of patients with LAA reported a marked improvement in their appearance and function and was more pleased with aesthetic results. Moreover, patients’ satisfaction, cosmetic results, body contouring was higher in LAA than abdominoplasty alone. Our results were near results of Brauman and Swanson [1,10]. Which proved the benefits of performing abdominoplasty which is preceded by liposuction which is better than abdominoplasty alone and they explained that; the main requirement for a safe and effective abdominoplasty is a well-perfused, healthy and mobile flap which is acquired in LAA. Complication rates after performing abdominoplasty operation vary widely, from 0% to 43%, which depends largely on the investigator’s definition of a complication [10-12]. Swanson reported nine patients (5.4%) developed a seroma after liposuction assisted abdominoplasty which is in line with our results and, lower than the rate reported in most previous studies (range,3.5-32%) [10,11,13-16] which performed abdominoplasty alone without preceded liposuction. Cases that are complicated with seroma were managed successfully with needle aspirations, without a need for reoperation. Flap mobility requires; detachment of the skin retaining ligaments which fixes the skin to the fascia mainly at the tendinous intersections and along the Linea Alba, additionally flap perfusion is maximal when it contains a well-perfused vascular network all these requirements are found during LAA. LAA was evolved gradually and it was previously named liposuction skin excision since [1,9-17]. The benefits of performing liposuction before the abdominoplasty are that; it loosened the subcutaneous tissue, the skin was stretched, umbilical transposition could be performed and avoid limited flap mobility. Additionally, performing liposuction, “disrupted - tore”, and the unyielding “skin retaining ligaments” and spared the (more flexible) blood vessels which are resulting in greater flap mobility than was possible with abdominoplasty alone. To clinically confirm the benefits of LAA flap compared with the Saldanha flap which was done by performing liposuction only, with tension on the liposuction flap, so as to disrupt the ligaments then carrying out a discontinuous dissection to mobilize the flap. Furthermore, the flap could be more thinned by open liposuction of its undersurface. And avoid performing liposuction through the full thickness of the subcutaneous tissue seemed safer, as no intrusion into the flap [6]. Results of previous researches stated that abdominoplasty techniques which are resecting the infra-umbilical panniculus also resect Scarpa’s fascia with its vessels, but LAA, could preserve some of these vessels because Scarpa’s Fascia’s superficial surface can be separated with liposuction and divided in the midline [1, 18-20]. Which strengthen our results. We are allowing patients to walk upright, which helps with respiration and venous return. Moreover, this leads to enhanced flap sensibility decreased infection rate because of the flap’s abundant perfusion [1]. Seroma formation remains a persistent complication of abdominoplasty [21,22]. The lymphatic drainage from the lower abdomen is superficial to Scarpa’s and it pierces the fascia 2-3 cm proximal to the inguinal ligament was incriminated in seroma formation [23]. Previously seromas can be effectively managed with local and systemic steroids before 2009 and Janis have confirmed the inflammatory pathogenesis of the seroma fluid [24,25]. Treatment with steroids might be beneficial in long-standing seromas; but, when steroids are used for prevention or treatment of fresh seromas, they might have harmful effects on the tensile strength of the healing tissues. Also preservation of a layer of areolar tissue above the abdominal wall is recommended to reduce rates of seroma [10,26]. Moreover, Saldanha describe a technique of performing abdominoplasty that limits tissue undermining and preserves the Scarpa fascia, as originally proposed by Le Louarn [27,28]. These authors report a greatly reduced rate of seromas [27]. Although most previous studies are in line with our results regarding the values of LAA in reducing the incidence of seroma but, different results were found by some investigators that there is an increased risk of seromas in patients treated with simultaneous liposuction others find no increased risk [13,16,29,30]. These discrepancies might be due to different number of patients different surgical technique used. It was found that electro-dissection leads to tissue destruction and seroma formation more than scalpel dissection which is not limited to abdominoplasty surgery; as fewer seromas are also documented after mammoplasty which may be a consequence of reduced tissue injury from electro-dissection rather an improved blood supply to the abdominal flap, limiting the degree of tissue undermining, flap mobilization and ultimately scar quality are compromised [10].

Strengths of the Current Study

Its prospective nature, consecutive patients, and the consistency of 4 surgeons and a symmetrical technique, our study benefits from a higher degree of reliability and little opportunity for conflicting factors which might affect the conclusions.

Performing liposuction and abdominoplasty, separately and in combinations, might be performed safely with suitable measures so as to decrease complications by reducing tissue trauma. LAA is proved better than abdominoplasty alone in decreasing incidence of seroma, pain and improving cosmetic results with better patient satisfaction and body contouring after operation. Scalpel dissection is preferred more than electro-dissection. Flexed patient position during in surgery is essential. Deep venous thrombosis and other post-operative complications may be decreased using safe precautions without a need for anticoagulation. The LAA technique is a simple and safe procedure to perform which is advised by a 22-year experience gained by plethora of previous studies, the LAA technique is suggested to surgeons as a better alternative to other lipoabdominoplasty techniques.

Figure 1A and B: Preoperative appearance of female patient with marking of liposuction before abdominoplasty. 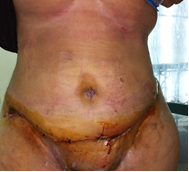 Figure 2: Appearance of the patient one week after performing liposuction assisted abdominoplasty (LAA).

Figure 3: Appearance of the patient one month after performing liposuction assisted abdominoplasty (LAA).