Acute Encephalitis in a Pediatric Patient Due to HHV-7: A Case Report and Review

Encephalitis is defined as an altered mental status or impaired consciousness that should last for more than 24 hours along with 2 or more of the following symptoms: 1) Fever, 2) Seizure activity or focal neurological deficit 3) High WBC count in Cerebrospinal fluid (CSF) fluid > 5/microL 4) Abnormal brain imaging ( CT or MRI) and EEG [1].
Although not very common in literature, Herpes simplex virus 7 (HHV-7) has been implicated in many cases of pediatric encephalitis [1,2]. Here we report the case of an 11 year old male previously healthy who presented with fever, lethargy, cerebellar ataxia and hallucinations, diagnosed clinically with encephalitis with ischemic lesions found on brain MRI, and found to have Human Herpes Virus 7 (on PCR of CSF sample) as etiology of his encephalitis.

A very wide range of common viruses have been associated with encephalitis and meningitis. In children less than 14 years of age, Enterovirus was found to be the leading cause according to Parisi et al [2]. However it is very important to keep a high index of suspicion for other viruses such as EBV: Epstein Barr virus, HAdV: human adenovirus, HSV: Human Simplex Virus, VZV: Varicella Zoster Virus, PvB19: parvovirus B19, HHV: Human Herpes Virus 6, 7 and HHV-8. In a Japanese study done in 2017 by Takasawa et al, 32% of 62 cases of acute encephalitis were attributed to HHV 6 and 7 [1]. Moreover, in another study done in 2016 by Saraya et al, HSV was responsible for almost 20% of the viral encephalitis cases studied in the adult population [3]. Diagnosis of encephalitis requires the combination of clinical, neuroimaging, laboratory and electrophysiological findings [4]. Encephalitis must be distinguished from other causes of encephalopathy and that is why it is important to rely on clinical status, presence or absence of fever, CSF study results and brain imaging. Work up should be done to rule out other causes of encephalopathy such as structural lesions, brain abscesses, metabolic or toxic encephalopathies [5]. In this case report, we introduce a simple case of acute encephalitis that was found to be the result of HHV 7 infection after ruling out other infectious etiologies, abnormal brain lesion and vasculitis. Brain imaging and lab data supported the diagnosis, and patient had complete resolution of symptoms in a few months follow-up.

A 11-and-a-half-year-old male patient previously healthy presented for three days history of fever. Over the past three days patient started having high grade fever (reaching 40 C, rectally) associated with 5-6 episodes of vomiting (non bloody, non-bilious), watery diarrhea and decrease in his per os intake. 2 days prior to presentation, he started having decrease activity and deterioration in his clinical status with lethargy. Upon presentation, patient was very lethargic, dehydrated, but meningeal signs were equivocal. He had unsteady gait, and impaired coordination with trouble performing fine motor tasks. Examination of the ears, and tonsils showed normal findings. Lungs were normal with no cardiac murmurs on auscultation. The abdomen was soft non tender and no hepatosplenomegaly felt.
As part of his work up, LP was done and it showed numerous WBCs with significant lymphocytic shift and a slightly elevated protein level. Soluble antigens on CSF done and it was negative and cultures taken including PCR. Patient was started on broad spectrum antibiotics including acyclovir for HSV coverage. Brain MRI done on the next day of admission revealed abnormal signal intensity on the diffusion of the splenium of the corpus callosum and in both centrum semiovale (Figure 1). These findings were correlated to acute ischemic changes, less likely to acute disseminated encephalomyelitis (ADEM). No anatomic abnormalities were found.
Due to the continuous neurological deterioration of the patient, and presence of visual hallucinations a course of IVIG was given over a period of 2 days. 2 days later repeat MRI showed ongoing ischemic insults of corpus callosum. EEG done as well revealing minimal abnormal electrical activity involving the left temporal lobe. PCR results came back positive for HHV 7 that was attributed as the cause of the patient’s symptoms. Nasal swab taken to rule out influenza as a cause was performed as well and turned out negative. To note patient had a vasculitis work up done to rule out any cause of his ischemic lesions but it came back negative. Patient clinical status improved, he no longer had any hallucinations, was afebrile and regained complete consciousness. Follow up MRI in few months showed complete resolution of the previous ischemic lesions and patient remained symptoms free.

In our patient’s case, who presented with acute change in consciousness associated with ischemic brain insults on imaging, acute ischemic attack was high on the differential list. Based on a German study conducted over 3 years and published in 2019, data revealed bimodal peaks of acute ischemic attacks in children less than 2 years old and adolescents [6]. Although rare in the pediatrics population, it is of great importance to rule out ischemic/hemorrhagic strokes in patients presenting with behavioral or neurological abnormalities [6,7]. In our case, laboratory tests done to rule out vasculitis and autoimmune disorders were all found to be negative.
Clinically, encephalitis can present in different forms and patients can have different symptoms. Symptoms include: fever, altered mental state, headache, seizures, vomiting and refusal to feed. No correlation has been found between the score on the Glasgow coma scale and suspicion of encephalitis based on the data collected in an epidemiological study done by Kumar et al [8]. Specific criteria must be fulfilled to diagnose encephalitis, and they can be divided into major and minor criteria [4]. Three or more minor criteria along with behavioral or neurological abnormalities lasting more than 24 hours are required to confirm the diagnosis of encephalitis. Based on the table 1, our patient satisfied the required criteria and hence the diagnosis of encephalitis was made. Investigations done revealed an infectious etiology, with PCR done on a CSF sample showing positive results for HHV-7. Previously, HHV-7 testing was not routinely performed as it was rarely considered a common pathogen leading to encephalitis. However, surprising data published by Takasawa et al. demonstrated that HHV6/HHV7 viruses were the second most common viral infections attributed to encephalitis in children [1,2].
It is significant to diagnose encephalitis at an early level, identify the causing pathogen and avoid delaying treatment as progression can lead to devastating neurological impairments and death [1-4]. According to review published recently in 2019, by Postels et al, the Global Burden of Disease (GBD) research demonstrated that both meningitis and encephalitis to be the leading causes of neurological dysfunction and death in 195 different countries in the year 2016 [9]. Aggressive and empirical treatment should be initiated when encephalopathy is suspected in order to improve outcome and avoid neurological sequela. Fay et al., discussed the case of an immunocompetent and previously healthy 11-year-old boy suffering from brain stem hemorrhagic encephalitis attributed to an HHV7 infection that was aggressively treated and recovered with no neurological impairments or attributed symptoms [10]. Our patient was put initially on broad spectrum antibiotics and then managed by IVIG due to the persistence of his symptoms.

This case highlights the importance of including HHV-7 in the differential diagnosis of encephalitis, as progression can lead to significant neurological impairment and subsequently death. Only recently has HHV-7 been identified as a potentially common cause of encephalitis among the pediatric population, with enterovirus being the primary etiology. It is therefore important to keep a high index of suspicion for HHV-7 encephalitis in patients, as in our case, who present with fever, altered general status, and vomiting among other symptoms. Additionally, proper clinical steps must be taken to diagnose encephalitis versus other causes of encephalopathy, with specific major or minor criteria needing to be fulfilled for diagnosis of encephalitis. 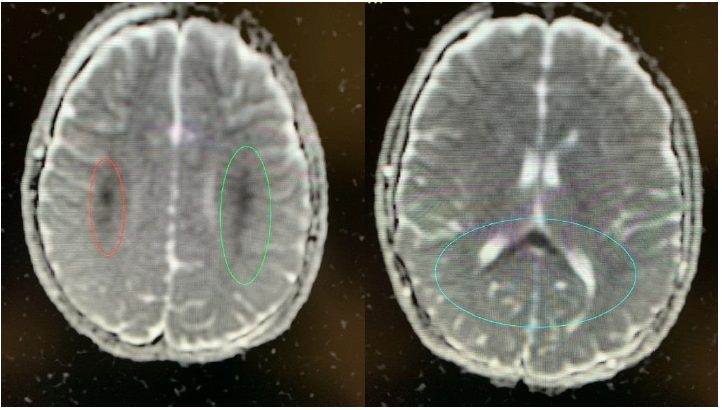 Figure 1: Brain MRI showing the ischemic lesions on apparent diffusion coefficient (ADC) in splenium of corpus callosum and in both centrum semiovale.

Table 1: Criteria for the diagnosis of encephalitis.